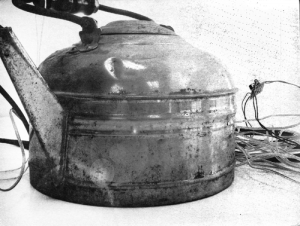 Originally developed in 1973 as part of an evolution of works involving unique intersections between constructed objects and sonic vibrations, David Tudor’s Rainforest IV is by far one of the most expansive and sonic environments for exploring the resonance of objects.  The piece originally evolved from a workshop featuring notable artists such as John Driscoll, Phil Edelstein, Linda Fisher, Ralph Jones, Martin Kalve, Bill Viola, and David Tudor himself. In the original realization of the Rainforest IV, each participant constructed a unique object, which, once transformed into a speaker with an additional microphone affixed to it, allowed the musicians to explore the resonance of their objects as they transducer sound through them.
In this performance of Rainforest IV, the FLEA (FIU Laptop & Electronic Arts) Ensemble has teamed up with The Wolfsonian-FIU for a special realization of this highly unique and exploratory work. The members of FLEA visited the vast collection of The Wolfsonian-FIU with the goal of investigating what particular collection items might sound like. After researching some selected items of the museum, the ensemble then found “analogs” of the museum collection, such as cameras, fire extinguishers, and tea kettles, they began converting them into instruments.

These sonic objects are distributed throughout the space, as the ensemble improvises together, exploring the inner resonance of their constructions. The audience is encouraged to move about the space, and explore the sounds emanating from the different instruments.

This unique  collaboration is supported in part by a The Wolfsonian-FIU Curriculum Development Grant, made possible with funding from the Andrew W. Mellon Foundation.