The Subtropics Festival requested that I perform Alvin Lucier’s Self-Portrait, a beautiful piece that he made for me some years ago, in which sound and light are connected through the physical apparatus of a wind anemometer. In conversations with art historians Godfre Leung and Alexandra Alisauskas for an interview in The Third Rail quarterly, I was asked about an aesthetics of the breath in my work. In the specific context of Self-Portrait and a series of pieces that I made in collaboration with Yasunao Tone in the ’80’s, they noted the process in which “the breath, via flute, and then via other operations — both scored action and machines— undergoes a transformation or conversion into a different kind of sound. Scores and machines ‘re-shape the breath’.” I take this opportunity to make new realizations of several pieces that were composed for me a number of years ago, as well as recent work that seems related to what Leung calls transformation/reshaping/conversion across media. 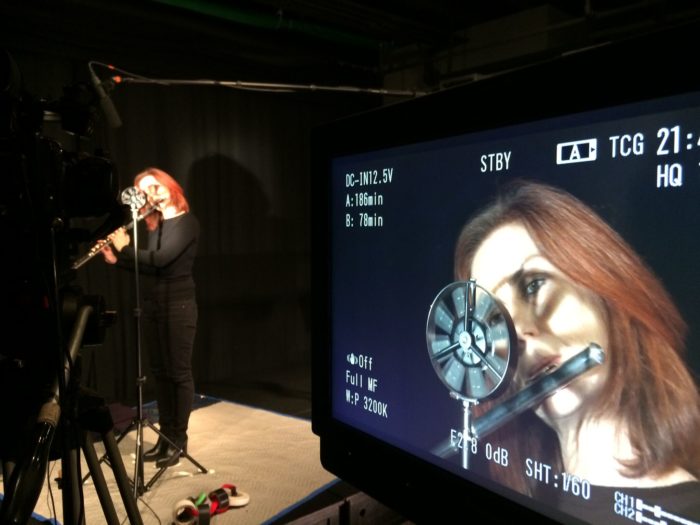 Self-Portrait is one of three works which explore the directivity of sound waves from musical instruments. A flutist stands several feet from a wind anemometer. A light is beamed through it, from the opposite side. As the flutist plays long tones toward the anemometer, streams of air from the lip of the flute cause its blades to spin at various speeds, hiding and revealing parts of her body. Self-Portrait was conceived in 1979. It was completed in 1990 expressly for Barbara Held, who has performed it several times in the United States and Europe.

One of a series of flute pieces that convert text into sound, in Lyrictron the sound of the flute causes a text to be generated by a computer system. The source of the flute score is a western transcription of flute tablatures from the Tang dynasty. When a tune is played the computer system detects pitches and converts the flute sound into a Haiku poem by choosing lines from a “dictionary” composed for this piece and stored in the computer. The poem is displayed on a TV monitor and is read aloud by the voice synthesizer at the same time. The process of generating Haiku from pitches played on the flute through a pitch tracking program is somehow similar to the Surrealist’s “Cadavre Exquis” method of writing a chance-determined poem. The original flute-to-Haiku software was created by David Meschter for a Commodore 64 computer, and this current update was programmed by Wolfgang Gil.

Pausa is a score or script that creates a space for performance. Part of a series of pieces exploring subtle variations in the intensity of the flute’s harmonics, it was composed in collaboration with media artist Benton C Bainbridge. The sounds of the acoustic instrument are paused as a static image using simple studio effects that make slight variations in the stereo image, and an “overdrive” that awakens or enhances high partials, creating a fluid and shimmering sound texture that is further modified by control voltages and other data that was received from the video instruments. The video is one of a series of abstract moving pictures that we recorded during the process of rehearsal and performance of the piece earlier this year.