Frozen Music is hosting a Free and eclectic marathon-style event we are calling Subtropicalia. By now you all know our ensemble Frozen Music is Gustavo Matamoros, David Dunn and Rene Barge. So we’ll skip it to tell you a bit about our special guests. The Complainer and The Complainers, straight from Poland and in true Subtropicalia fashion, will bring a playful collaborative spirit to the North Beach Bandshell as part of a rare Florida-Mexico tour.

What does it sound like? Try dark techno and slightly out-of-tune 80s electro-rock, as played by a group of talented but disoriented folk musicians. What does it look like? A post-apocalyptic Partridge family gives an art lecture and throws a party all at once. That explains it. Kind of. Or not really. You just have to see and hear it, that’s all!

The lineup can be fluid, but here’s who’s expected to perform: They are also in town to record and play with local artists, including frequent cross-continental collaborator Randall Beaver.

Biography
The Complainer and The Complainers (aka TC&TCS) is the global-reaching indie pop project of Wojciech Kucharczyk, who started the festivities in 2005 as a solo follow-up to his successful stint (1994-2008) as czar of legendary Polish indie label mik.musik.!. Evolving into a full-force band by 2007, TC&TCS consists of a shuffling lineup of a mostly youthful cast of characters, each with a set of special skills (both musical and non-musical), along with some international guests and friends from previous projects. The overall effect is like a superhero cartoon show with each member bringing his or her special talents to form a creative juggernaut. TC&TCS shows are all-out energetic affairs, combining acoustic and electronic, common and exotic instrumentation to create a sometimes quirky, sometimes muscular, and strangely catchy amalgamation of sounds, stories, visuals, and motion. Before becoming the chief Complainer, Wojciech was involved in other successful and interesting projects and bands since the late 1980s- Molr Drammaz, retro*sex*galaxy, Go Underground To See More Animals, TerriTerrorTorium (duo with Felix Kubin), Pathman, HWDJazz to name a few.

Touring History
The Complainer (with and without The Complainers) has participated in international festivals such as: I.D.E.A.L/Nantes, Progress/Ljublijana, Nuits Sonores/Lyon, Garage/Stralsund, Eurocultured/Manchester, Off Festival/Myslowice, New! New!/Brno, Pulse/London, Skif/St. Petersburg, C.sides/Tel Aviv, Transvizualia/Gdynia, Unsound/Krakow, Ars Cameralis/Katowice, Nowa Muzyka/Cieszyn and many gigs in nice places such as Berlin, Hamburg, Paris, Brussels, Amsterdam, Den Haag, Wien, Bratislava, Minsk or Moscow and numerous smaller ones. In 2009 alone, more than 50 concerts were on the itinerary.

The Complainer and The Complainers appear in Subtropicalia thanks to the generous support of the Adam Mickiewicz Institute, Warsaw

“Nicole Martinez is a sound and video artist specializing in interactive and mixed media and, live sonic performances. Having received her Master’s degree in Electronic and Computer Music while teaching music theory, she is heavily influenced by a strict conservatory education. This background serves as a foundation, as well as a point of departure from tradition and convention. Electronics and computer programming form another component of her background and education which brings forth the technological aspect of her work. Nicole discards traditional instrumentation in exchange for invented sounds and instruments. Her methods include original instrumentation such as her own hand made oscillators as well as hacked [children’s] toys. These analog instruments are complimented by rich sounding digital samples which are the product of programs Nicole writes using the Csound programming language which is an open source coding language, based on C, created as a joint effort between and Bell Labs, Princeton and, MIT led by Max Mathews and Barry Vercoe in the 1960’s. Nicole’s technical and production experience spans the arts and industries from large scale musical production to network broadcasting to education and training all in the areas of audio engineering and video editing. “Miami-based sound wizard Dino Felipe has made a lot of records– more than 30 in the past decade, if you count his various groups and compilation appearances– but very few of them sound alike. His primary M.O. is electronic noise, but he’s also good at droning ambience, fractured punk, sample-heavy frivolity, and weirdo bedroom pop. He’s made a subterranean career out of dodging definition, so it figures that his first record for No Fun, the noise label run by his friend and colleague Carlos Giffoni, would be his poppiest to date. It may not also be his best, but it’s up there.” (excerpt by Marc Masters, pitchfork.com, July 24, 2008) 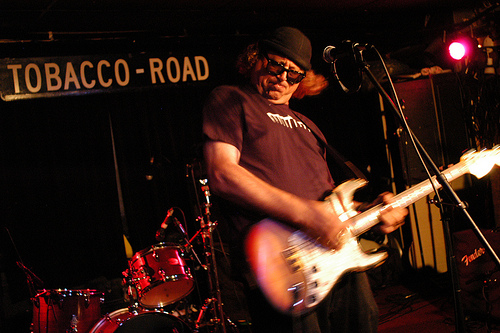 Frank “Rat Bastard” Falestra is a transgressive guitarist, bassist and audio engineer who was a founding member in numerous psych, noise music, and performance art rock bands of the 1980s, 1990s and 2000s. He assisted Marilyn Manson & the Spooky Kids in recording their early demo cassettes.

In the early 1980s Falestra co-founded a recording studio in North Miami Beach, Florida which existed under different names and locations for nearly twenty years. He currently runs his own studio in the South Beach section of Miami Beach, Florida. Among his most famous studio credits are recording Marilyn Manson and the Spooky Kids demo cassette The Beaver Meat Cleaver Beat, and serving as second engineer and studio coordinator on their 1991 cassette After School Special.

Falestra also made a compilation of tracks by bands based in/around Miami, Florida, around the early 1990’s, known as The Funnel Zone.” (mansonwiki.com)