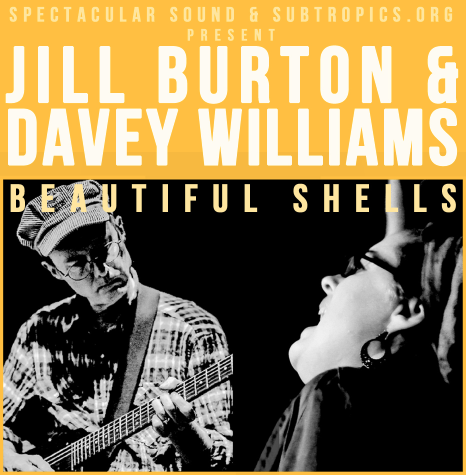 LISTEN to an excerpt from a performance by
Davey Williams in 2009 during Subtropics 20
then rush! and buy some tickets
[audio:https://subtropics.org/audio/ST20-daveywilliamssolo-excerpt.mp3]Marathon Solo (2009)

Watch a video of Jill Burton performing recently in Miami

Not convinced yet? The read the Artburstmiami.com article
davey williams and jill burton make beautiful shells
by Paul Borr

JILL BURTON is an extended vocalist and movement artist who focuses amazing energy from the environment into her stunning performance art. Considered by LaDonna Smith of Improvisor Journal to be “…one of the great foundation improvisors of America.” “… an undeniably beautiful voice. … Ultimately Burton is subverting common perceptions about what vocalists should do.” said Norime Dworkin, of High Performance. “There is a non-verbal level of energy … it’s revealed in the physicality of the energy exchange between the artist and the audience.” said NY’s EAR Magazine. “One of the finest singers I have ever heard.” said Steve Malagodi, host of Miami’s Modern School of

A lifelong guitarist, from jazz bands and blues bands, soul bands to avant-garde prog-rock and punk, Davey’s done it all.  He got his start with Memphis blues man Johnny Shines.  He’s worked with Southern Surrealist madman Col. Bruce Hampton and OK, Nurse, the punk band Fuzzy Sons, an improvisational three-piece called Say What!, with New Music stalwarts Ladonna Smith, Jim Staley and Ikue Mori.  He’s also published a CD of duets with South Florida drummer Abbey Rader.  He’s most well known for his work with the New York avant-rock group Curlew, featured at CBGBs and the Knitting Factory.  Williams has appeared live at over 1,500 concerts worldwide.  Williams also co-founded The Improviser, a journal of experimental music, in 1981.  He has also worked as a music critic for the Birmingham News.