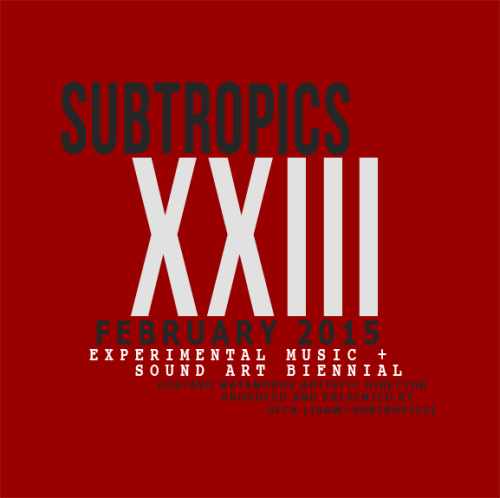 Come anytime or in-and-out between 3PM and the end of the day to witness the best of Miami’s experimental music during our 23rd Subtropics Marathon. Here are some highlights in no particular order:

PUNTO: The Helga Pictures
for viola, tape + video by Armando Rodríguez Ruidíaz?
The Helga Pictures are a series of more than 240 paintings and drawings of German model Helga Testorf created by Andrew Wyeth (1917–2009) between 1971 and 1985. Helga Testorf was a neighbor of Wyeth’s in Chadds Ford, Pennsylvania, and over the course of fifteen years posed for Wyeth indoors and out of doors, nude and clothed, in attitudes that reminded writers of figures painted by Botticelli and Édouard Manet. To John Updike, her body “is what Winslow Homer’s maidens would have looked like beneath their calico.

FEDERICO BONACOSSA
Federico Bonacossa will premiere Chen-Hui Jen’s new piece for guitar and ring modulator entitled Inwards, Drinking with my Shadow. He will also perform Jacob David Sudol’s …spaces to listen to from within (iii) (2014) for prepared classical guitar, transducers, and electronics — the third in a series of works that focus on creating and exploring multiple interrelated sonic environments.  In this work, the guitar is tuned in just intonation and prepared with a transduced and stick tack.  The electronic include field recordings from Taiwan and live DSP techniques that reveal hidden acoustic properties of the guitar.

DAN DICKINSON
Daniel Dickinson’s new piece Ball Bounce resembles the experience of playing a video game. as a live bassist plays, “balls” are dropped into a virtual 2-D space (on screen) with surfaces for bouncing. As the piece progresses, it moves through different “levels” (like a video game) with different visual structures and thus different sonic footprints.

DANIEL DUGAS + VALERIE LeBLANC
Valerie LeBlanc and Daniel Dugas, whose work lives in the interstice between film and poetry, will screen Flow: Big Waters. “The Everglades in July is abuzz with hatching eggs of all kinds. Our bodies remembered how to sweat as we submerged ourselves in this intense and invigorating environment. Whatever we thought about the place before arriving changed as the reality of actually being there emerged.”

DAVID BRIESKE
David Brieske will be doing a set of synthesized sounds mixed with field recordings. Erig Gottlieb will stage a performance of John Cage’s Winter Music on 8 simultaneous tracks with a recitation of excerpts from Indeterminacy.

PAULA MATTHUSEN
Paula Matthussen offers her recorded composition Lullaby. Having long been interested in the localizing aspects of ambient sounds, “lullaby” attempts to eavesdrop on the unintentional sounds present in domestic spaces at disparate locations.  Specifically, “lullaby” draws its sonic material from “Sleep”, one of the tremendously popular “virtual choirs” spearheaded by Eric Whitacre.  While the number of participants these projects involve is impressive, the localizing aspects of household noises – the whirl of computer fans and chirping of nearby appliances – are systematically removed.  With this in mind, all sonic material for “lullaby” was drawn from youtube video submissions for “Sleep”, with the voices removed using noise reduction software.  The original SSAATTBB voicing of the choir is preserved, as the spaces and technology that records them sing together.

RENE BARGE
Along similar lines, sound artist Rene Barge offers a performance of A Thing for Us to Know. He says of the piece: On occasion I arrive at objects that unfold into performative experiences that become a language of my own. For example, I may be walking on my property, with a bucket in tow to fetch water, and the sound of that bucket swinging in my hand no longer becomes a vehicle for water; it becomes a vehicle for listening. It may take some time to fetch the water at this point as I become distracted for some time by the joy of performing a swinging bucket. It is also not uncommon for prior recorded experiences to meander acoustically and merge with my property. When a performative experience merges with prior recorded experiences the results are inquisitive and inspiring. How do I explain an intrapersonal experience? How do I explain these few things I come to know through an intelligence that understands things introspectively and intuitively?  It is difficult to forget what I know, especially since I arrived at it through my own experiences. I listen and learn who I am and with A Thing for Us to Know, I will attempt to deliver something I have learned and am prepared to learn again. I can use live, bi directional microphones for surround sound with a multi channel laptop component on the side or live, stereo microphones for stereo sound with a stereo laptop component on the side. I will perform swinging plastic bucket and a watering can.