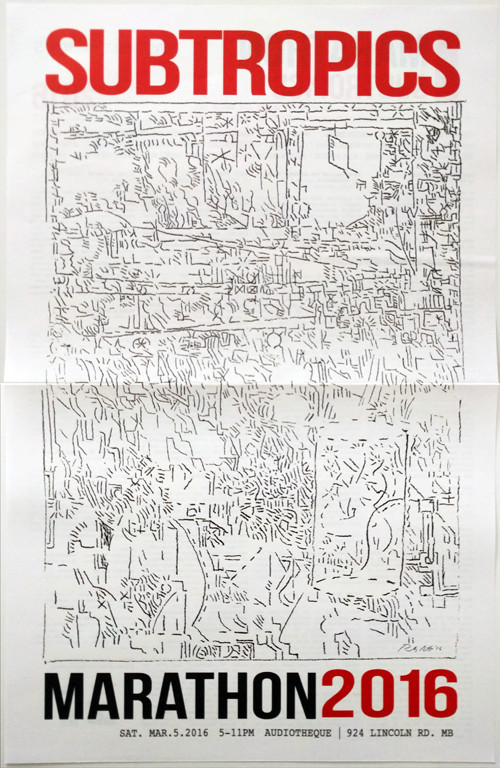 This program can be heard anywhere in the world
Live stream at 5PM EST:
www.spectacular.media
host: Stephen Malagodi

IMPROVISATION FOR ACOUSTIC GUITAR AND ELECTRONICS (2016) | 10m
by David Brieske

MUSIC ON A BOUND STRING No. 2 (2015)
Installation by Alba Triana
on view in Studio 203 all day Saturday and Sunday

For detailed information, pickup a free copy of our poster/program featuring artwork by Randy Nutt and designed by Claudia Ariano at ArtCenter/South Florida

SFCA [isaw+subtropics.org] is the leading proponent of experimental music and sound art in the Southeast, and the nourishing platform for projects like Audiotheque, the Subtropics Biennial and yearly Marathon, the Frozen Music Ensemble, iSAW’s Experimental Sound Archive and Sound Studio, and many more projects designed to produce, promote and present the newest, most on-topic new music and sound art experiences in South Florida.