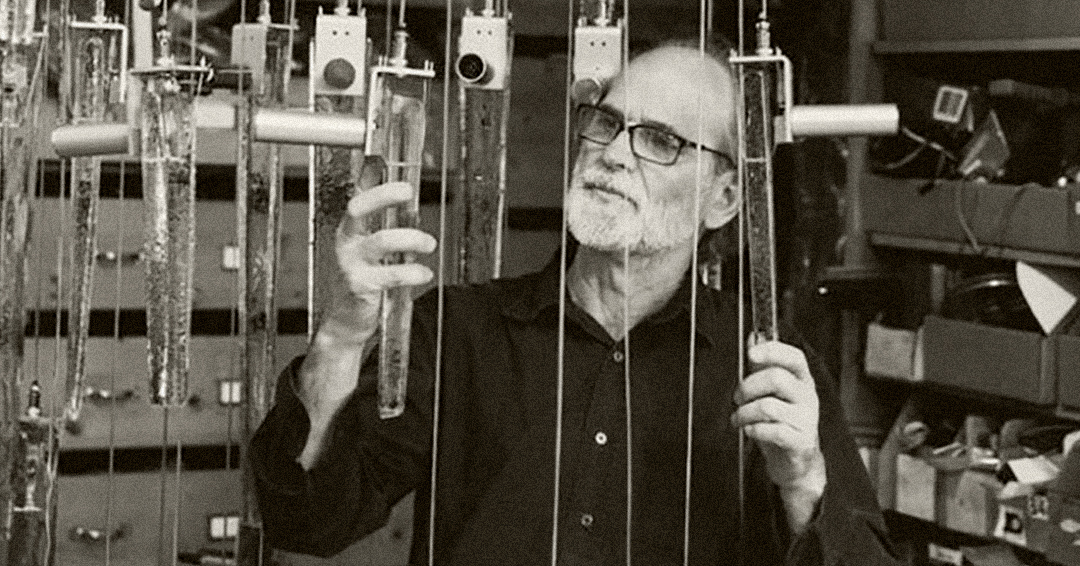 Trimpin is a German-born composer and sound artist who has lived and worked in Seattle since 1979. His sound sculptures, installations and set designs have been developed in collaboration with artists such as Merce Cunningham, Samuel Beckett, Conlon Nancarrow and the Kronos Quartet. His work has appeared at museums, galleries, and festivals across the Pacific Northwest. The documentary film TRIMPIN: The Sound of Invention premiered at the South by Southwest Film Festival. He is a recipient of the Guggenheim Fellowship and the MacArthur “Genuis” Grant

Unmastered 1997 recording of an excerpt of Phffft by Trimpin, installed in 1997 in the planetarium at Miami Museum of Science

On the original list of confirmed Subtropics 25 artists but unable to attend as he’ll be in Germany during the new 2021 dates, Trimpin has also been a member of our advisory board for decades and since his 1997-98 commissioning iSAW residency, a generous and enthusiastic supporter of the festival… with a wonderful accent.

In his absence we will show archival documentation and interview excerpts about his iSAW residency and large-scale piece, M.I.A.M.I. Klangflotte (or Sound Fleet).

The piece consisted of an ensemble of rickshaws, each a moving cluster of mechanically activated instruments wirelessly controlled via modem by Trimpin from a laptop computer on a bike. Thanks to Olga Garay, then director of art programs at Miami-Dade College’s Wolfson Campus, we had the resources needed to transport the rig and to stage sonic parades from Homestead’s Main Street to Fort Lauderdale’s Las Olas Riverwalk, including Miami locations such as MDC Kendall Campus, Lincoln Road and MAM’s Museum Plaza on Flagler Street.

Co-curated with Kate Rawlinson, Klangflotte was a project that involved dozens of workshop participants, students and volunteers that helped build the pieces at a shop in MDC South Campus over the two-year-long residency. Perhaps some of you were involved as participants or witnessed the work in action. Maybe you have anecdotes to share on mic during Subtropics 25. That would be great. We’d like to collect them.

The one that comes to mind involves the shipment of mangoes that had to first be buried in our backyard for weeks, dough up, wrapped in layers of plastic and sent via UPS to his home in Seattle. He eventually came back with a bottle of Schnapps.