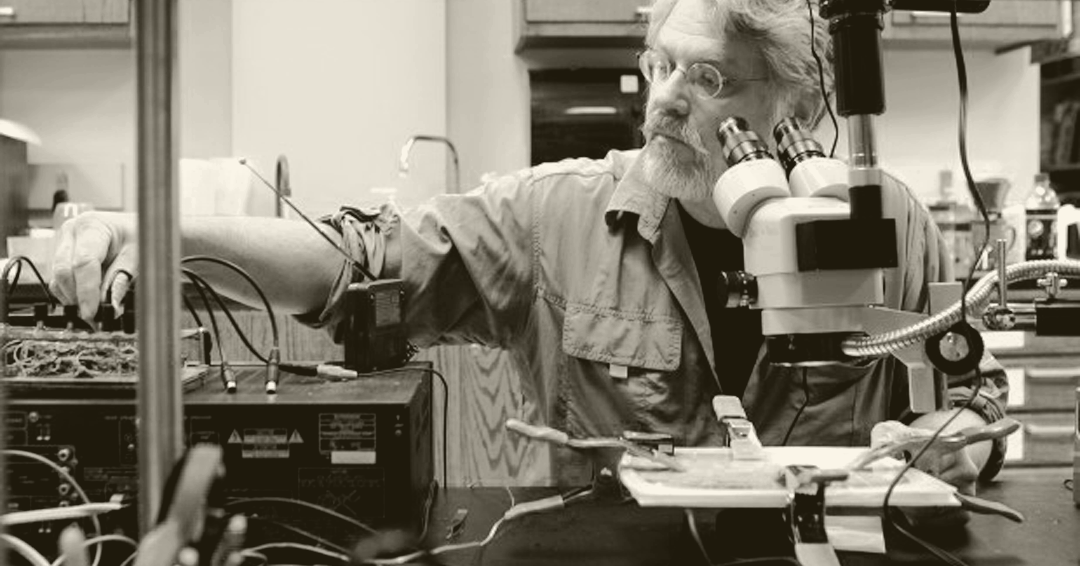 Composer David Dunn was born in 1953, San Diego, California. He was an assistant to the American composer Harry Partch and remained active as a performer in the Harry Partch Ensemble for over a decade. He has worked in a wide variety of audio media inclusive of traditional and experimental music, installations for public exhibitions, video and film soundtracks, radio broadcasts, and bioacoustic research

Presently he is a Professor Emeritus of the University of California Santa Cruz. His compositions and soundscape recordings have appeared in many international forums, concerts, broadcasts, and exhibitions. Besides his multiple books, recordings and soundtracks, he has been anthologized in over 50 books and journals

Much of his current work is focused upon the development of listening strategies and technologies for environmental sound monitoring in both aesthetic and scientific contexts. Dunn was the recipient of the prestigious Alpert Award for Music in 2005 and the Henry Cowell Award from the American Music Center in 2007. He lives in Santa Fe, New Mexico

I knew about David’s music and work for a while before I was asked to be in a panel for CalArt’s 2005 Alpert Awards, but we had never met.

I recall hearing about him from friends living in New Mexico. One of them was sound artist Steve Peters of Nonsequitur who released the sound portrait of Bob Gregory in his Aerial #5: A Journal in Sound CD series in 1992. He sent me a copy of David’s intriguing Insects and Angels. The other was Joan LaBarbara who came to perform Morton Feldman’s Three Voices, as well as selections from her 1991 album, Sound Paintings (Lovely Music). During her visit she showed me a recording of a piece of hers to do with a New Mexican landscape which featured a short field recording of crows she mentioned was done by David. I still can hear the bird sounds in my mind’s ear.

My sense of David was that of a mythical beast, something that I knew existed but in some kind of parallel world I would have to find time to research further to better understand it. When Irene Borger from The Alpert Foundation sent me the applications and a saw David’s name, I had a feeling I’d get the chance to do just that.

The pool of applicants was an impressive list of serious, successful artists, any of which could have easily won the fellowship award. I learned a lot about music from them all. Yet, it was David whose career profile and accomplishments as well as the uniqueness of his work that rose easily to the top. I recall we panelists all knew David’s application to be the clear winner, even as his music was so different from all the others. Kudos to Irene and The Alpert Awards for creating such an inspiring program. I am grateful for her having selected me as a panelist and for facilitating the conditions for David and I to meet. And that’s how we met and became not just friends but collaborators and by now family.