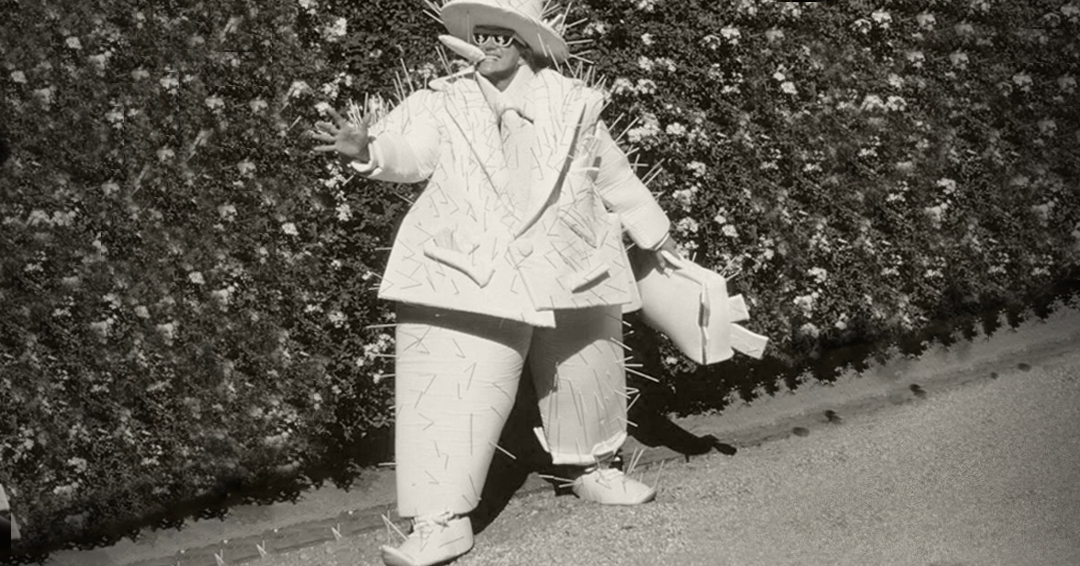 Pat Oleszko makes a spectacle of herself—and don’t mind if you laugh. Using the world as a stooge, her work includes elaborate costumes and props incorporated into diverse performances, film, installations with lithe accompaniment, spatial events with the cast-off dozens and much uttered shenanigans.

She has worked from the popular art forms of the street, party, parade and burlesque house to the Museum of Modern Art, the Whitney, Documenta, the Lake Placid Winter Olympics and Lincoln Center. She has appeared in fields, streams, oceans and mountain tops, and in Sesame Street Magazine, Ms, Playboy and Artforum.

An overview show of her myriad works traveled to 11 museums and artist’s spaces. A much decorated artist, Oleszko has received multiple fellowships from the National Endowment and the New York Foundation for the Arts, the Rome Prize, a John Simon Guggenheim Fellowship, the DAAD (Berlin), several Tony nominations, a Jim Henson grant and a “Bessie” (the New York Dance & Theater Award for Sustained Excellence) among others.

She continues to pump irony and disparately bring home the beacon. After all, the truth squirts.

An event topped with festive bespoke paper hats created for the occasion by Pat Oleszko from Festival proper-gander and her past 2-dimensional work, are distributed amongst the festival Pa’ticipants and filmed in an Anniversary Procession of Some Import around the Deering Estate, houses and grounds accompanied possibly with curious new sounds appropriate for the Grande 25th Celebratory Occasion.

“This will be the first time Pat Oleszko comes to Miami for Subtropics. She seems not the typical Subtropics artist. However, the first time we met was in December of 1988 during New Music America. Pat was on skates, wearing tights, a feather mask over her eyes and a pretty good size cruise ship around her waist in place of a lifesaver … all together an incredible sight.

It was time for the Saturday concerts on board the newly baptized Sovereign of The Seas and her task was to make it up the ramp to the top entrance of the ship in time and find her place for the kick off festival event where she was to be master of ceremonies. I was her only chance. I only remember pushing and pushing behind her rolling up the ramp until we made it. Then, I believe some people came along and helped her cross the threshold and we parted ways.

She came back a couple of years later for a performance with Tigertail. I volunteered to take her to the airport. It was startling to learn that all that stuff i saw fill up every inch of the large stage at The Colony during her show the night before, her famous inflatables, actually fitted nicely into a proportionally small bag. What a m(use)agician.

Then I saw her films which are delightful. During her residency in Ybor City she staged a powerful (I’m going to call it) protest song with paint coming out of her mouth. At the end of that performance she put up all her props for sale. I went for her very light Honer Roll heavy weight championship belt.

Four years ago (2016) she came as our guest to a gathering at Phill Niblock’s loft in New York’s Chinatown for an evening of arepas and a concert. That was also the last time we saw Vito.

Now we are hiring her for her bio-advertised ‘uttered shenanigans,’ and her ‘genial absurd presence,’ though my ears are listening forward to her pun-filled scripts I hear as nothing other than pure sound poetry.”