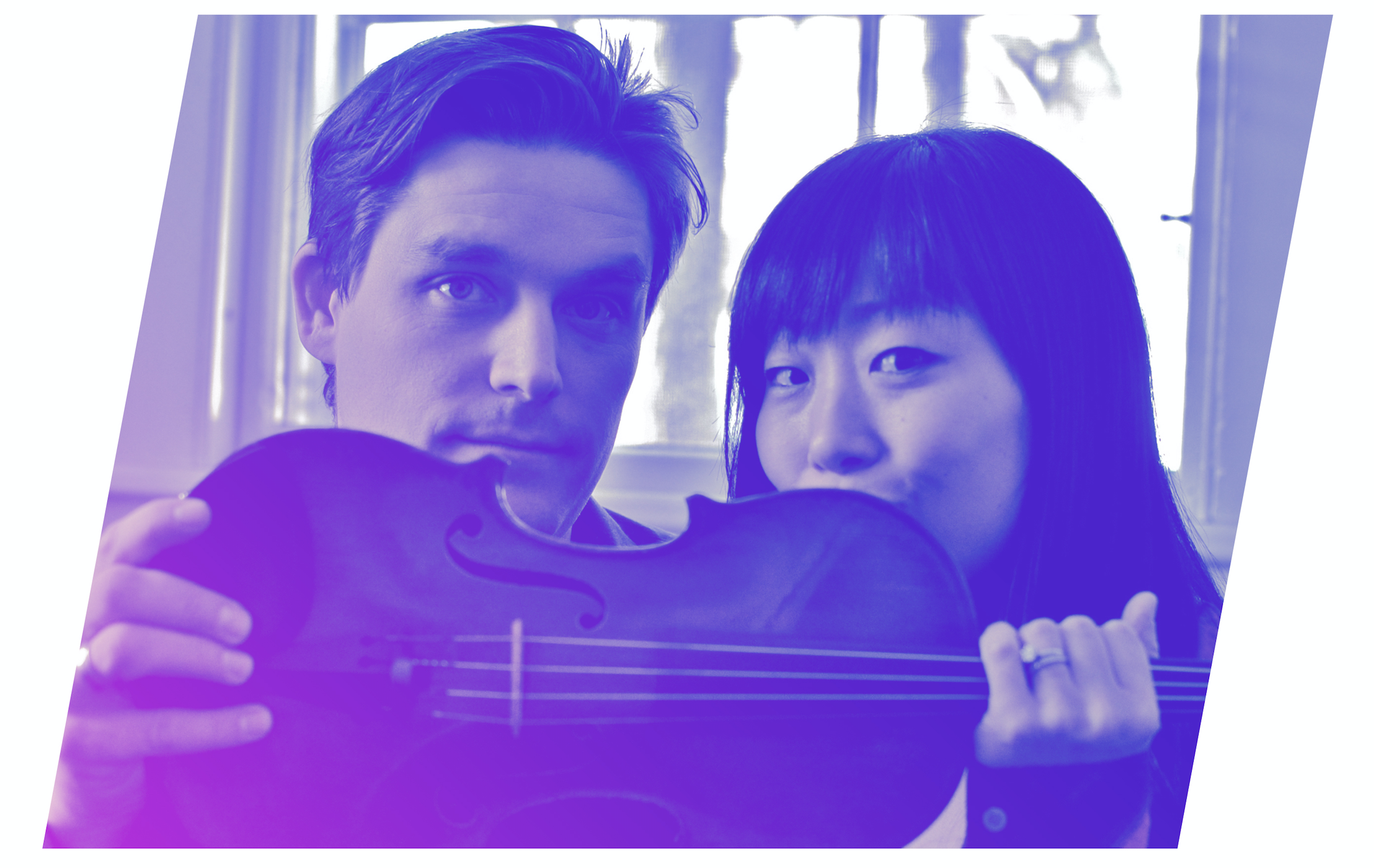 Free and open to the public
(donations will be appreciated)

EDGE (30:00) Is there a discernible boundary between tone and noise? Between chaos and order? Combining amplified violin played by Pauline Kim Harris and Syrinx, a new acoustic synthesizer invented and played by Spencer Topel, the duo explores these concepts in a continuous improvised work with the source material consisting of simple tones acoustically modulated, distorted, and filtered through the instruments themselves.

FOUR AUDIBLE EXPERIENCESOF MOVEMENT OF SOUND IN SPACE (15:00) A set of four sound experiences created by Gustavo Matamoros designed to showcase the capabilities of his Audiotheque 2.0 project’s 30-channel sound system.

/SHä’kôn/ (45:00)
PK Harris Topel Duo presents a reconstruction of the J.S. Bach Chaconne (BWV 1004) as an ambient-immersive exploration presented over the course of 45 minutes using both electronic, acoustic, and live violin. The Chaconne serves as a structural backbone to the work, appearing often as small disassociated fragments, while at other moments the Chaconne is inaudible, informing only temporal structure. As with renditions of the Chaconne by past composers such as Brahms and Busoni, /SHä’kôn/ extends the notion of transcription metaphysical, framing the Chaconne both as a musical composition and as a collective-subconscious memory.

PAULINE KIM HARRIS is a Grammy-nominated artist who engages in classical to the experimental/avant-garde. Co-concertmaster and soloist with the S.EM. Ensemble, Ostravska Banda, Ensemble LPR and Wordless Music Orchestra, she is also a frequent guest with New York City’s leading new music ensembles such as Alarm Will Sound, Ensemble Signal, Argento,Transit,Talea and ICE and has toured with the Orpheus Chamber Orchestra. Pauline serves as Music Director of the Bill T. Jones/Arnie Zane Dance Company and has performed as violin soloist for choreographer Pam Tanowitz and David Parker of The Bang Group. As a curator, she co-produced Drawing Sounds II, with husband, Conrad Harris at the Drawing Center, most recently, Petr Kotik @75 at (le) poisson rouge and continues at Carnegie Hill Concerts. As a member of violin duo, String Noise, she has expanded the two violin repertoire, pushing boundaries in groundbreaking new works. Despite her active performance schedule, Pauline carves out time to compose. Commissioned by the St. George’s Choral Society her piece for organ, choir, cello and soprano, “When We Were” was premiered in 2016. A collection of new works will be presented in July 2019 at her debut residency at The Stone as well as the world premiere of “gold/crack” at Roulette in June. Pauline was in the final masterclass of Jascha Heifetz.

SPENCER TOPEL is an artist working with sound, performance, and installation. He is a recipient of numerous awards and honors, including a Danish International Visiting Artist Residency in 2013 (DIVA), the Palmer Dixon Prize from the Juilliard School for best composition, BMI and ASCAP Awards, and was an artist-in-residence with the Meitar Ensemble in July 2014 (Tel Aviv). Topel has produced works for many of America’s premiere music and art institutions, including The Barnes Foundation, The Arts Club of Chicago, The Drawing Center NY, the DeCordova Museum and Sculpture Park, the Minnesota Orchestra, the Juilliard Symphony, Oregon Symphony, and the Aspen Contemporary Ensemble, TILT Brass, FLUX Quartet, and the Callithumpian Consort. Notable national/international collaborations include HUB New Music (Boston), FIGURA Ensemble (Copenhagen) the Contemporarte Ensemble (Venice) and the Meitar Ensemble and the Israeli Conservatory (Tel-Aviv). Topel received degrees from Cornell and The Juilliard School before joining the Tenure-Track Faculty at Dartmouth College, and is currently artist-in-residence at the Yale Quantum Institute at Yale University.

Made in Miami, Audiotheque 2.0 is the brain child of sound artist Gustavo Matamoros. It consists of the fine tuning of three elements: the space (the acoustic and visual environment); the instrument (a 30-channel costume designed sound system); and the content (the sounds we ultimately hear). It is a proposed model for the conditions necessary for offering the experience of sound art effectively to a general public.