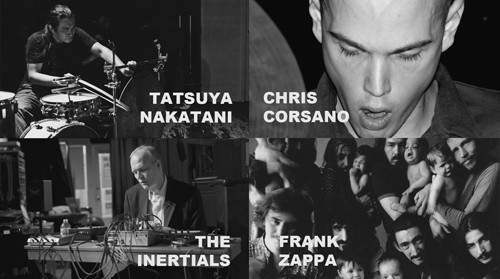 Tatsuya Nakatani is by now no stranger in South Florida. His free improvisation style of drumming is rich in contrasting and unussual timbre and rhythmically exciting. He will be sharing the Audiotheque stage with our own Miami-based saxophonist, Matthew Taylor

Anticipatong the upcoming 75th anniversary of Frank Zappa’s birth, Eric Gottlieb Vazquez will explore the diverse styles Frank worked with and explain his importance as a composer of the later half of the 20th century

Voted one of the ‘100 Greatest Drummers of Alternative Music’ by Spin Magazine (May 2013) and described as “a peripatetic ace of the avant-garde.” – Nate Chinen, New York Times (Sept. 2012), Chris Corsano is a drummer who has been operating at the intersections of free improvisation, avant-rock, and noise music since the late 1990s. He’s worked with saxophonists like Paul Flaherty, Joe McPhee and Evan Parker; guitarists such as Sir Richard Bishop, Heather Leigh Murray, and Jim O’Rourke; and one-of-a-kind artists like Ghédalia Tazartès, Björk and Jandek. His style incorporates high-energy free improvising, more textural work, and augmenting the drum kit with everything from cello strings stretched across the skins to disassembled saxophone parts