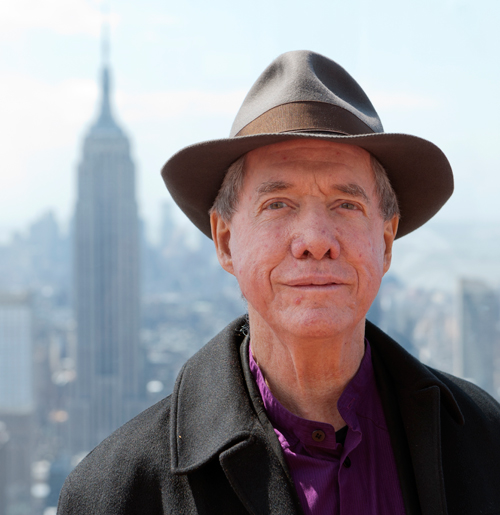 Robert Ashley was one of the most original minds in contemporary music. Based on his insights into the relation between music and words, he invented a new form of opera, a kind of singing in a manner of speaking, which has fascinated audiences and critics world wide. Over the more than thirty years that they worked together, Ashley wrote a number of concert versions of arias from his operas, as well as stand alone works, for baritone Thomas Buckner. Each piece in this concert showcases a different aspect of Ashley’s creativity, and yet the concert cannot begin to cover the astonishing range of his work.

The first half of the concert is the briefest possible performance of the opera he often called his favorite, “Atalanta, Acts of God.” Ashley composed and wrote10 hours of material for the opera, from which each performance could be constructed. For this concert, Buckner will perform an aria from each of the opera’s three acts. The style of this opera is what the composer calls ‘spontaneous musical invention based on the declamation of the text’.

The second half contains two stand alone pieces composed especially for Buckner, one without words, in which the singer is one voice in an electronic orchestra, and one in which the accompaniment uses mouth percussion and amplification in an entirely new way. In each of Robert Ashley’s vocal works, there is a unique combination of precision and freedom for the performer, making for an exciting musical experience.

The Mystery of the River (10′)
Voice and prerecorded electronic orchestra

The Producer Speaks (24′)
Voice and piano

For over forty years, baritone Thomas Buckner has been active as a singer and producer of new and experimental composed and improvised music. A long-time member of the late Robert Ashley’s Ensemble, Thomas Buckner returns to Miami Beach to present music specially composed for him. In tonight’s program Ashley’s Odalisque, The Producer Speaks, and WWIII, Just The Highlights will be accompanied by members of FIU’s New Music Ensemble.

Thomas Buckner, who was awarded the American Music Center’s Letter of Distinction, has for four decades championed music of the avant-garde in America and throughout the world as a performer, producer, and promoter. A former student of the legendary Metropolitan Opera baritone, Martial Singher, he was trained in the classical tradition and has continued throughout his distinguished career to broaden the scope of his vocal styles, specializing in a wide range of experimental music. Buckner has collaborated with a host of “new music” composers including Robert Ashley, Noah Creshevsky, Tom Hamilton, Earl Howard, Matthias Kaul, Leroy Jenkins, Bun Ching Lam, Annea Lockwood, Roscoe Mitchell, Phill Niblock, Wadada Leo Smith, Chinary Ung, Christian Wolff, and many others. He has made solo appearances at Carnegie Hall, Lincoln Center, Harvard University, the Art Institute of Chicago, the Edinburgh Festival, the Prague Spring Festival, and the Bienalli Festival of Venice, presenting a repertoire that includes more than 100 compositions, written for, or dedicated to him.