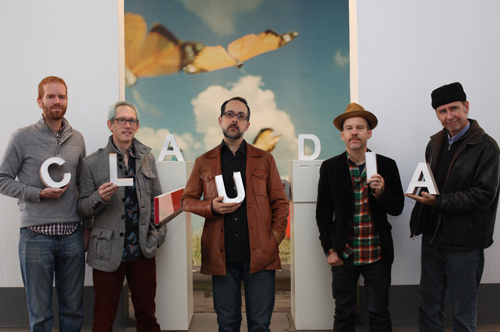 This performance of John Hollenbeck and the Claudia Quintet, presented by SFCA and its Subtropics Biennial in collaboration with EMIT Series and its St. Pete. Jazz Festival and the Timucua Arts Foundation, is supported by Presenter Consortium for Jazz,  a program of Chamber Music America funded through the generosity of the Doris Duke Charitable Foundation.

From NYC, the Claudia Quintet has walked a unique path in contemporary jazz since their founding in the late 1990s. Unlike most jazz ensembles where the particular musicians may come and go, drummer, composer and leader John Hollenbeck always wanted Claudia to be a ‘band’ with a sound not only determined by the compositions and the instrumentation, but with the actual players who perform the music. This concept is why Claudia has had an immediately identifiable sound since its inception. In that sound, the exceptional artistry and individuality of each musician is skillfully revealed throughout Hollenbeck’s original compositions.

Formed by Hollenbeck in 1997, this NYC ensemble’s sound continues to explore the edge without alienating the mainstream, proving that genre-defying music can be for everyone. The Claudia Quintet has amazed audiences from Alabama to the Amazon. Their singular sound has inspired dancing hippie girls at a New Mexico noise festival, the avant-garde cognoscenti in the concert halls of Vienna and Sao Paolo, and a generation of young musicians worldwide. In the course of the thousands of miles they have traveled together and hundreds of concerts they’ve played, the Claudia Quintet has evolved and grown, developing a dynamic live sound based on trust and spontaneity. They bring this powerful energy into the studio, where they record the old-fashioned way, live, playing as a band.

Over the past decade, the group has released six CDs that are critically acclaimed worldwide and whose appeal extends well beyond, as well as including traditional jazz audiences. The group’s first album, “The Claudia Quintet,” was released on the Blueshift CRI record label. The group has since established a long time relationship with the Cuneiform label, releasing five albums with them.