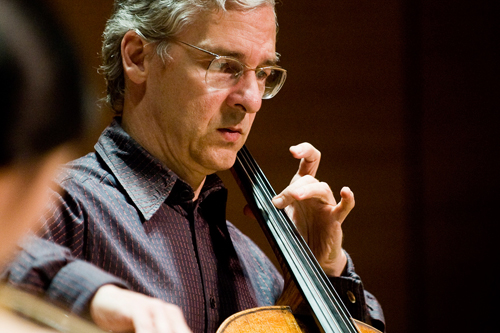 Called by ArtForum “one of the great cellists” as well as “spellbinding and minimal,” Charles Curtis has woven a unique career through the worlds of classical performance and musical experimentation.

In the last few years Curtis has developed a unique repertoire of major works created expressly for the distinctive qualities of his cello-playing. The great American experimental composer Alvin Lucier has composed numerous works for Curtis, including pieces for cello and sine waves, cello and piano, and cello with large orchestra. French composer Eliane Radigue created her very first work for a purely acoustic instrument for Curtis, the hour-long solo “Naldjorlak I,” which Curtis has performed scores of times throughout the world; more recently “Naldjorlak III” and “Occam 5? have been developed collaboratively with Curtis. Artist and performer Alison Knowles created a unique graphic score for Curtis which has been realized in galleries and alternative settings.

This concert in collaboration with New Music Miami and will feature two of these works by Alvin Lucier, plus Radigue’s “Occam 5,” and Knowles’s “Rice and Beans for Charles Curtis.”