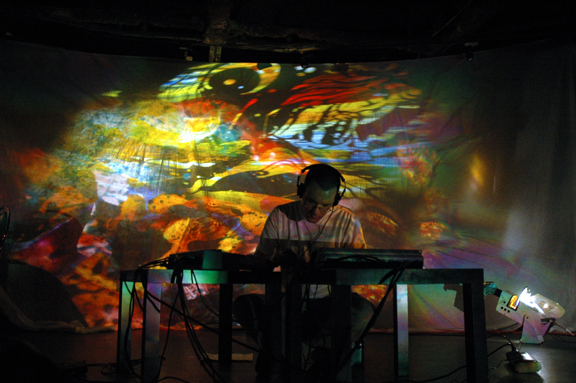 let us know you are coming by joining our FB event

‘io: solo six’ consists of three layers or versions of a solo performance with one cymbal and one snare drum. Put another way, the performance moves through three distinct stages of transformation, each of which explores various superhuman properties of recorded and amplified sound. The first stage is a long-form, solo, acoustic performance with cymbal and snare drum; the solo is recorded with binaural microphones mounted on eyeglasses by performer. The binaural recording is designed to convey a particularly “realistic” sense of sonic space which is closely related to what is heard by the performer. The second stage involves an electro-acoustic playback of the recording via four-channel surround system without effects or editing. Nonetheless, as a result of the performer moving his head—and the microphones—nearer to and further from the instruments, the “direct” playback reveals complex acoustic phenomena. In particular, playback reveals inherent nuances in the close-up sounds of cymbals, deep resonant tones that are effectively inaudible to listeners more than a few inches away, and movements of sounds caused by the room’s resonant properties. The third and final stage performs radical real-time transformations of acoustic recording through layering and digital effects.

to keep up with news about audiotheque, visit and like our page on FB