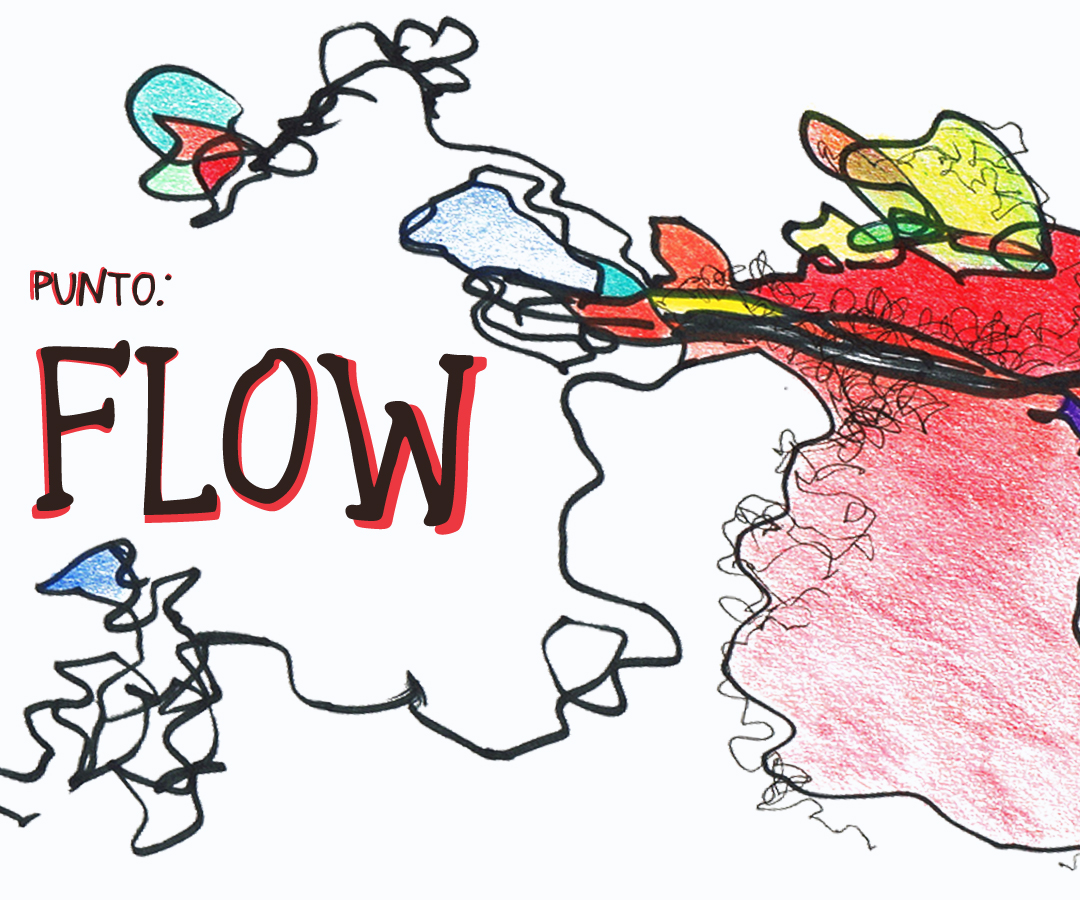 FLOW is a sound structure based on improvisations by Gustavo Matamoros and Armando Rodriguez performed on acoustic and electric guitars, kemenche, psaltery, bagpipe chanter and percussion instruments. It follows the notion of a “Scattered Unison” – a complex musical texture based a single melodic idea unknown to all but one musician in a group. Like the “instant listening” required to say exactly what someone else is about to say, without knowing what the words are going to be.

PUNTO is a conceptual and experimental music ensemble founded by composers Gustavo Matamoros and Armando Rodriguez. It was very active throughout the nineties performing at venues such as Center for the Fine Arts and Ground Level Gallery in Miami Beach. It’s most ambitious and memorable concert was staged at the Cameo Theater and featured a full evening of traditional and newly composed Fluxus event scores. After a decade of inactivity, the members of PUNTO have reunited to continue their explorations in sound and other media, and to approach performance from a different perspective that is engaging, promotes deep listening that points to discoveries and new art forms.

ARMANDO RODRIGUEZ is a Cuban composer, guitarist and bagpiper. He studied composition with José Ardévol and Roberto Valera. He is a graduate of the National School of Art and the Instituto Superior de Arte of Havana, Cuba and was professor at the National School of Art until 1980. His music has been performed in Cuba by numerous ensembles including The National Symphony Orchestra of Cuba and the Cuban National Ballet, and in the USA and around the world by ensembles such as Relâche, at festivals such as NYC’s Bang On A Can, Primeras Jurnadas de Musica Contemporanea de Sevilla, Sao Paulo Bienale, Latin-American and Caribbean Forums and the Subtropics Festival. Rodriguez received a National Union of Writers and Artists of Cuba (UNCEAC) Music Composition Award in 1978 and an Individual Artist Fellowship Award from the State of Florida.

GUSTAVO MATAMOROS is a Miami based composer, sound artist, educator and performer. He studied at University or Miami with Dennis Kam and John Van Der Slice (1979-83) and later studied with Earle Brown. He became interested in conceptual music, electronic arts and concert production. He was the technical coordinator of New Music America-Miami Festival (1987-88) and as director of SFCA he founded the Subtropics Experimental Festival of Music and Sound Arts (1989). In Miami, he is a member of PUNTO with Armando Rodriguez, and of Frozen Music, another ensemble with David Dunn and Rene Barge with occasional guest artists Russell Frehling and David Behrman. His sound installations have been exhibited at Miami Art Museum, the Fort Lauderdale Museum of Art, the North Miami Center for Contemporary Art (now MoCA) and the Bass Museum of Art. His large scale and public art projects include commissions from the Adrianne Arsht Center for the Performing Arts, FIU School of Architecture, Vizcaya Museum and Gardens in Miami and the Power Center in Ann Arbor, Michigan. He is the creator of Listening Gallery.