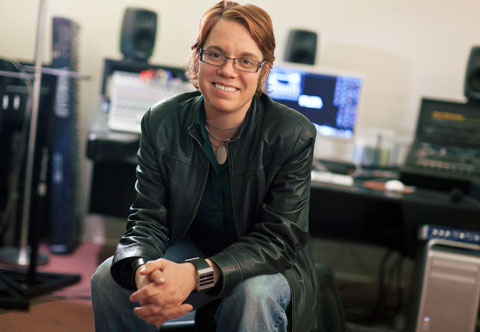 • meditation on a string and a sigh
• eden’s arch of promise bending, mvt 1
• hommage a la salon bruit

About her pieces, she writes: “songs of fuel and insomnia began as a series of very short improvisations, acting both as etudes and experiments for live-processing.  Gradually cobbled together, they provide very short vignettes acquired through travel, with longer sections evolving into separate pieces.  songs of fuel and insomnia developed initially as part of residency at STEIM, working alongside performer Kathryn Woodard.”

Paula Matthusen is a composer who writes both electroacoustic and acoustic music and realizes sound installations. In addition to writing for a variety of different ensembles, she also collaborates with choreographers and theater companies. She has written for diverse instrumentations, such as “run-on sentence of the pavement” for piano, ping-pong balls, and electronics, which Alex Ross of The New Yorker noted as being “entrancing”. Her work often considers discrepancies in musical space—real, imagined, and remembered.

Her music has been performed by Dither, Alarm Will Sound, International Contemporary Ensemble (ICE), orchest de ereprijs, Ballett Frankfurt, The Glass Farm Ensemble, James Moore, Kathryn Woodard, Todd Reynolds, Kathleen Supové, Margaret Lancaster and Jody Redhage. Her work has been performed at numerous venues and festivals in America and Europe, including the Tanglewood Festival of Contemporary Music, the MusicNOW Series of the Chicago Symphony Orchestra, Merkin Concert Hall, the Aspen Music Festival, Bang on a Can Summer Institute of Music at MassMoCA, the Gaudeamus New Music Week, SEAMUS, International Computer Music Conference and Dither’s Invisible Dog Extravaganza. She performs frequently with the electroacoustic duo ouisaudei, Object Collection, and through the theater company Kinderdeutsch Projekts. Awards include the Walter Hinrichsen Award from the American Academy of Arts and Letters, a Fulbright Grant, two ASCAP Morton Gould Young Composers’ Awards, First Prize in the Young Composers’ Meeting Composition Competition, the MacCracken and Langley Ryan Fellowship and recently the “New Genre Prize” from the IAWM Search for New Music. Matthusen has also held residencies at The MacDowell Colony, Yaddo, create@iEar at Rensselaer Polytechnic Institute, STEIM, and the Atlantic Center for the Arts. Matthusen completed her Ph.D. at New York University – GSAS. She was Director of Music Technology at Florida International University for four years, where she founded the FLEA Laptop Ensemble. Matthusen is currently Assistant Professor of Music at Wesleyan University, where she teaches experimental music, composition, and music technology. 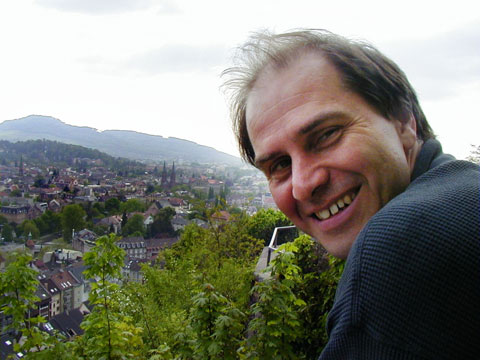 States Variable is based on a set of identical sound processing chains for which I have composed 36 distinct tunings or “states”. The performer’s task in realizing the piece is to move continuously through the musical terrain these states define.  This process of navigation is controlled with a graphics tablet and a keyboard.  Key presses assign different attributes of the tablet to different aspects of the configuration, allowing the performer to select a state as the sonic ‘target’ and define the path taken in approaching that state.  Of course, it is possible to change direction before actually attaining a state, so these states can appear either as specific moments or as timbral tendencies throughout the work. This piece is closely related to fugue states (1995), using the same means of performance and underlying model.  The original was realized with a pair of dsp cards in an Apple II computer using a synthesis library written by Phil Burk.  This new work is written in SuperCollider and takes advantage of the 192kHz sampling rate readily available with commercial audio interfaces to come closer to the analog systems upon which some of processing is modeled.

Watching the clock, waking to an alarm, waiting for the phone to ring, waiting for your call to be answered, refusing to answer the phone. All of these moments of suspension and discontinuity have a kind of Pavlovian force. Our response to these stimuli is not cerebral, it is spinal. An Outgoing Message uses multiple telephones and eight channels of sound synthesized to the exacting standards of the world’s best telephone systems to explore the transition zone between sounds and commands.

The dial tones, ring, and busy signals of the world’s telephone systems comprise an odd collection of simple musical gestures, immediately and inescapably recognizable to some and confusing to others. For example, the charming 10/8 pattern of the Italian dial tone can be disconcerting to someone used to the droning dial tones of the rest of the world. The frequencies of the North American phone tones (350, 440, 480, 620 Hz) spell out a pleasingly exotic scale with a quarter tone sharp fourth and a very flat seventh. The transition from a peaceful Javanese pelog to an irritating busy signal occurs the instant two tones are pulsed together at a steady 120 times a second. One final oddity – in films, a dialtone appears whenever one person hangs up on another. In life, dialtones are harder to come by. In fact, they are now almost extinct…

RON KUIVILA  composes music and designs sound installations that revolve around the unusual homemade and home modified electronic instruments and software configurations he designs.  He pioneered the use of ultrasound (In Appreciation) and sound sampling (Alphabet) in live performance. Other pieces have explored compositional algorithms (Loose Canons), speech synthesis (The Linear Predictive Zoo) and high voltage phenomena (Pythagorean Puppet Theatre). More recent concert works have recalled the sound world of live electronics while exploiting the compositional possibilities of digital signal processing (fugue states/states variable). Since his early work with ultrasound, installations, including The beatification of the facsimile tone, Engel in Erdton, Getting To Know You, The Weather at Six, Alex at Twilight, and Visitations, have been a central focus of his work.

Kuivila has performed and exhibited installations throughout the U.S., Canada, and Europe.  He was been a fellow, composer, artist in residence or guest professor under the sponsorship of the DAAD/Berlin, the Rockefeller Foundation, the Getty Research Institute, the Institute for Studies in the Arts at Arizona State University, Brown University, California Institute of the Arts, Mills College, the Banff Centre for the Arts, Tempo Reale, Stichting STEIM and he Technische Universität Berlin. He is currently University Professor of Music at Wesleyan University.

This concert will be followed by a gathering of the Audiotheque’s Listening Club to celebrate the birthday of Ornette Coleman in collaboration with Steve Malagodi’s Spectacular Sound.