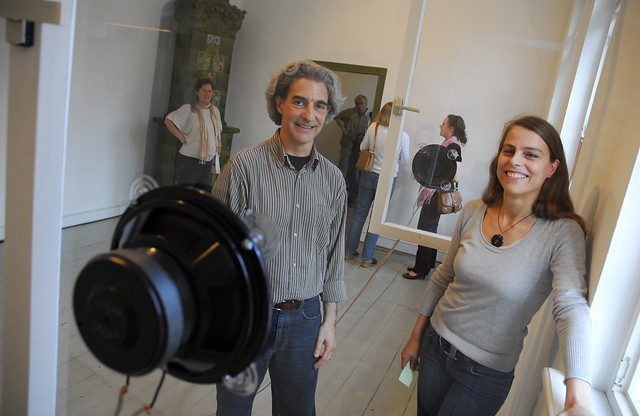 Held is a two-channel sound installation in which the raw loudspeakers act as prosthetics for the body and as visual objects in themselves.  The two loudspeakers are attached to a glass surface with suction cups, installed symmetrically on-site in a way that reinforces their mirror image similarity.  The recording they project is that of a person inhaling, holding his breath for as long as possible, and then exhaling.  The greater part of the work is occupied by the long suspended held breath, during which time the loudspeakers visibly quiver due to a low inaudible rumble in the recording.

Lou Mallozzi (b. 1957, American) is a sound artist who dismembers and reconstitutes language, sound, gesture and image on stages, sites and recordings. He is co-founder and executive director of Experimental Sound Studio, and teaches in the Sound Department of the School of the Art Institute of Chicago.