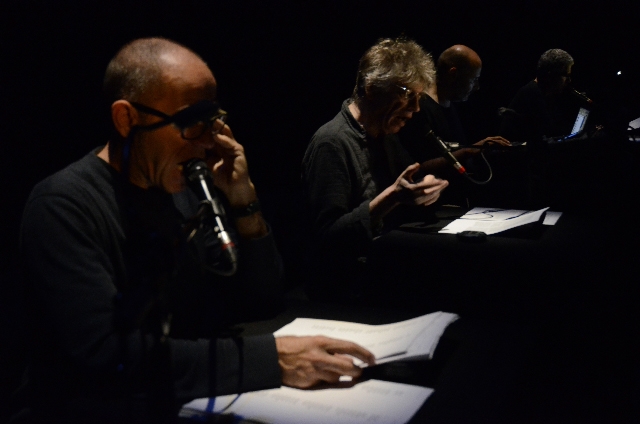 Foreign Bodies
Four times in the last season of Grü Theater in Geneva, Vincent Barras & Jacques Demierre, Swiss sound artists-in-residence, invited a foreign body (as we speak of a foreign language) to get in touch with their sound poetry duet.

Last May, they invited the Australian sound poet based in New-York Chris Mann, to confront the formal and conceptual rigor of their spoken words compositions with his own work.

Vincent Barras & Jacques Demierre
Talk, verbal stuff, is taken as a primary component, drawn from materials found in the work of linguist Ferdinand de Saussure on various ancient and modern languages (the so called “Indo-European” languages). The detailed analysis of the sonorities of the ancient and modern languages, their re-elaboration and re-composition is finally embodied in a score-text, spread out on stage in its concrete dimensions through the language performance of the two sound artists. The body is where this vocal investigation takes place, digging in the primitive sound matter of language.

Chris Mann
His work for voice are based on complex texts, freely composed to allow a play of wit and humor. Exploration of the textures and gestures of Australian speech, with its rhythms and qualities of color, pitch, intonation and emphasis. Interest in language, in technology, in systems and philosophy is evident in his work. His approaches reading in a unique and incredibly dense way, with great virtuosity and high-speed embedded texts. “Language is the mechanism whereby you understand what I’m thinking better than I do. (Where “I” is defined by those changes for which I is required).”

The trio Vincent Barras, Jacques Demierre and Chris Mann, is joined on stage by Thierry Simonot, sound engineer, who extends the speech space of the three performers through a set of loudspeakers.

Foreign Bodies is the performance of that process of transfer, of exchange, of translation between the work of Barras&Demierre and that of Mann, an amazing confrontation of different sonic organisms.

Foreign Bodies is possible with the support of
Canton of Geneva

and City of Geneva

Listening Gallery programs at Audiotheque are organized by

SFCA[isaw+subtropics.org]
leading proponent of experimental music and sound art in the Southeast

with support from
John S. and James L. Knight Foundation

special thanks to our partner organization