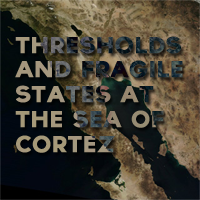 David Dunn’s installation, “Thresholds and Fragile States at the Sea of Cortez,” weaves several sounding relationships into a single, complex event. What you hear is not a composition, in the traditional sense of a deliberate placement of sounds in time, but three distinct layers of unpredictable or chaotic interaction, each operating according to its own conditions.
The first layer is Dunn’s own invented instrument, a network of oscillators that in effect performs itself. The circuits do not operate independently of one another, but disrupt and redirect one another in highly unpredictable ways. Dunn refers to the resulting sounds as “a type of machine ‘conversation’” and relates this complex set of relationships to those of a living ecological network, which he has explored in the past among bark beetles and underwater insects.
The second layer is a field recording at an estuary of the Sea of Cortez in Mexico. The sounds of this natural environment meet the sounds of the network of oscillators, not unlike the interaction of freshwater and salt water that takes place at the estuary. These two layers are not intended to be heard in isolation, in a soundproofed room, or under headphones. They are distributed to the odd and even speakers of a 20-channel system under the awning of Art Center/South Florida, stretching around the southwest corner of Lincoln Road and Meridian Avenue, Miami Beach.
The third layer is whatever happens, spontaneously and audibly, at this street corner at the time that you stop to listen. The installation will be running until mid March. Come meet the artist at the Listening Gallery’s upcoming Soundings, on February 18th at 7:00 PM.

NOTES FROM THE COMPOSER:

Many of the sounds exhibited in this installation were produced by a one-of-a-kind network of non-linear chaotic oscillators capable of generating an infinite variety of emergent “auditory behaviors.” As autonomous electronic systems, these circuits represent an alternative philosophy for the creation of electronic sound synthesis. More akin to living systems than information processing devices, these circuits produce a dazzling assortment of complex noises where the sounds produced emerge as a type of machine “conversation.” In this sense the circuits resemble the closed nervous systems of living unities that are under constant perturbation from other similar closed nervous systems. The intention is not to simulate the high level functioning of biological organisms and their cognitive capacities but rather to take this question down to its most primary level of autonomous-closure machines where self-organization is more obviously inseparable from behavior. Ultimately the emergent complexity of these systems results from the dynamical attributes of coupled chaotic attractors interacting in a high dimensional phase space that is similar to the kinds of interactions and feedback that might exist between diverse sound makers within a living ecological network. Juxtaposed against these synthetic sounds are others that were recorded in an estuary on the coast of the Sea of Cortez, Mexico. While the circuits herein described give rise to autonomous sound behaviors based upon mathematical pattern formation, they also explore the underlying mechanisms that may help weave sounds together in the natural world. In many ways this work is an attempt at understanding pattern formation where comparisons and interactions between these natural and artificial systems might shed light on how similar dynamical properties might be operating at their generative levels. — David Dunn

Thresholds and Fragile States at the Sea of Cortez was commissioned for the Listening Gallery by SFCA [isaw+subtropics.org] with generous support from:

John S. and James L. Knight Foundation, by the City of Miami Beach Cultural Affairs Program and Cultural Arts Council, by the State of Florida, Department of State, Division of Cultural Affairs and the Florida Council on Arts and Culture, and by Miami-Dade County Mayor, the Board of County Commissioners and the Cultural Affairs Department, as well as by Sennheiser, manufacturer of state-of-the-art tools for audio professionals. It is also possible with the generous support of our partner organization Artcenter / South Florida