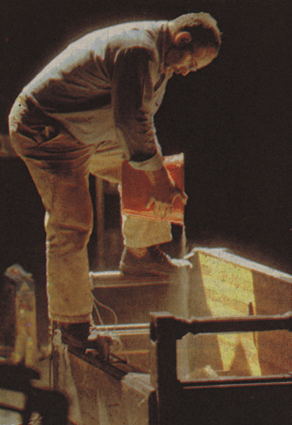 The eighties and early nineties in Miami were a time of increased interest in Experimental Music and Sound Art.  Mary Luft was staging concerts with experimental music pioneers through a Meet The Composer Series while Steven Malagodi of WLRN-FM hosted his fabulous Monday night New Music Miami shows (the most exciting two-hours on the radio).

While still a student at the University of Miami, the atmosphere was pure electricity when a number of us students and faculty organinzed the Metamusic Festival with John Cage as guest of honor.  Later in the decade everything came to a head when Tigertail and Miami-Dade College presented the huge 1988 New Music America Festival in Miami, followed by the birth of our own annual Subtropics Experimental Festival of Music and Sound Art.

Extremely active in those days was Miami Beach native Russell Frehling — one of the most imaginative composers I have ever meet.  His sound installations from the day were unique and mesmerizing explorations of the quality and characteristics of sound in three dimensions.  Here is an artist statement in his own words: “I work mainly doing installations and my work tends to sit in a strange niche between music and sculpture. I work with sound, but with the key musical elements of time and linear organization minified or removed. My conceptual concerns are fundamentally sculptural, but I work with an invisible, massless material. Here sound is given an unaccustomed context in which its physicality becomes the essential issue: where shape, texture, density and arrangement in space become the objects of reflection.”

Russell was then very active in the scene.  He curated a whole year or programming for Tigertail’s Meet The Composer Series and participated in many events as performer, organizer and volunteer until he left for New York in the mid-nineties.